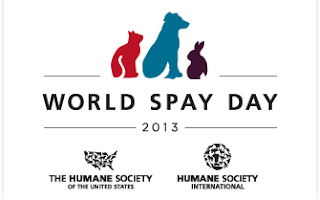 This month is Spay & Neuter Awareness Month & today is World Spay Day. I would like to tell you a little bit about pet over population, and the many positive health and behavioral benefits to spaying & neutering your pets.
In every community, in every state, there are homeless animals. In the U.S. alone, there are an estimated 6–8 million homeless animals entering animal shelters every year, and only about half of these animals are adopted.
The number of homeless animals varies by state. In some states there are as many as 300,000 homeless animals euthanized every year. Sadly, these are the puppies and kittens of cherished family pets and even purebreds.
Many people are surprised to learn that nationwide more than 3 million cats and dogs are euthanized in shelters. Spaying and neutering is the only effective method to help stop overpopulation in dogs and cats.

There are many theories when it comes to the medical and behavioral effects of spaying and neutering dogs and cats. It can be a controversial subject and there are numerous viewpoints out there among trainers, breeders, and even within the veterinary profession.

The primary benefit of spaying female dogs and cats is to prevent mammary cancer. A dog spayed before her first heat will have a near zero chance of developing mammary cancer later in life. After the first heat, this incidence grows to about 7 percent, and after the second heat the risk is about 25 percent. Statistics are similar in cats. Another potential condition in intact females is a bacterial infection of the uterus called pyometra. Treatment is surgery and can be very costly. Less common conditions such as uterine and ovarian cancer are 100 percent prevented by spaying. All of this is also true for rabbits. Rabbits reproduce faster than dogs or cats and often end up in shelters where they must be euthanized. Spaying or neutering rabbits can reduce hormone-driven behavior such as lunging, mounting, spraying and boxing.

The major health benefits involved in neutering a dog involve the prostate gland. As dogs age, the prostate will gradually enlarge. This is known as benign prostate hyperplasia or BPH. The prostate under the influence of testosterone is also prone to infection. This is an extremely painful and sometime life-threatening condition, which is not likely to resolve without neutering and often invasive surgery. Other medical conditions that are prevented include testicular cancer, along with certain types of hernias and perianal tumors.

There are no concrete facts when it comes to the behavioral changes seen in spayed and neutered dogs and cats. Neutering male dogs and cats can reduce urine marking in your house, aggression towards other dogs, and territorial aggression. It is important to realize that these behaviors can become a habit and continue after neutering.
Many experts say that once a pet is older than 1 year of age and still intact, undesirable behaviors are more likely to become permanent even if they are neutered at that time. The most dangerous behavior seen in intact males is roaming, i.e., running away to look for a mate, because it leads to animals running away as well as car accidents.

The reproductive tracts of the female dog and cat are dormant for most of the year. From a behavioral standpoint, the animals will act as if they were spayed most of the time. When in heat, females are more likely to be aggressive and can show behavior such as howling and writhing on the ground. And an intact male can detect females in heat from miles away so it is not safe to leave them outside unsupervised.

Whether your pet likes to romp and play or simply relax and be pampered you can rest assured your dog or cat will enjoy a vacation with us. Our trained, dedicated staff looks forward to pampering your pet with plenty of one-on-one attention.