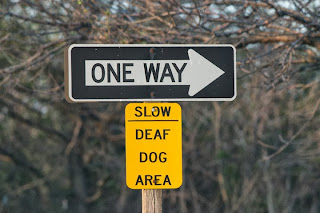 It is Deaf Dog Awareness Week, so we want to bring to light some facts and myths about deaf pets.

Deafness in animals can be inherited from birth, acquired through trauma, stem from drug reactions, or come on with age. Deafness is more common in white animals, but any animal can be deaf. Some breeds, such as Dalmatians and Boxers, are more prone to deafness than others. Thirty percent of all Dalmatians born are either deaf in one ear, or deaf in both ears. Some deaf animals also have albinism, meaning that they lack normal melanin pigment in their eyes, nose, or skin, although not every albino animal is deaf.


Deaf pets are just as intelligent as hearing pets. They make great pets and do well with other animals in the home. it's a myth that a deaf pet "needs" a hearing companion to function successfully. Deaf animals bark, meow, and make all the regular sounds their hearing counterparts make. They can be taught sign language commands and are fully trainable. The only real caveat in adopting a deaf pet is that it should never be allowed to roam freely outdoors unless it is in a securely fenced enclosure, since they cannot hear cars or other dangers approaching.


Speaking of myths… Here are some other myths about deaf dogs.


Myth: Since they cannot hear, deaf dogs are easily startled when someone wakes them, touches them when they are not looking at you, or even walks up behind them. Over time, deaf dogs develop fearful, aggressive personalities. They will bite when startled, or attack for no reason.


You could say that no other myth has caused more damage than this one. It seems to make sense, and therefore it is seldom questioned. This myth assumes that "being startled" is a permanent condition, and that he will always respond by becoming fearful and aggressive.


The truth is that deaf dogs adapt to their hearing loss, and become comfortable with their surroundings. A hearing dog can be startled by a loud noise, just as a deaf dog can be startled by an unexpected touch. Owners of deaf dogs report that their dogs' responses to being touched unexpectedly range from a "YIKES" response, where the dog may jump, to a "huh?" response, where the dog simply turns and looks. Some may be briefly disoriented when awakened, but few become aggressive or bite in response.


You can help teach your dog to be desensitized to the startle of being touched unexpectedly or awakened from sleep. One suggestion would be by first walking up behind the dog when he isn't looking; touch the dog, then immediately pop a treat in the dog's mouth when he turns around. The dog quickly associates good things with being touched unexpectedly, and learns to respond happily. Not all deaf dogs require this type of training, but it is helpful for the more sensitive ones.


Another suggestion would be to start slowly by first placing your hand in front of the sleeping dog's nose, allowing him to smell that you are near. Next lightly touch the dog and begin to gently stroke the dog with two fingertips, then with your entire hand. Most deaf dogs will wake up during some part of this exercise. When they open their eyes, their owner's smiling face and perhaps even a treat rewards them. In a matter of weeks, the dog becomes accustomed to waking up when the owner places a hand in front of his nose, or lightly touching him. Waking up becomes a gentle, positive experience.


Myth: Deaf dogs should never be placed in homes with children. They will startle and bite, they will become aggressive, and they will be hard to train.


The truth is, if a deaf dog is well socialized to children, it is as safe to have in a home with children as any other dog. What is more important is the dog's history, its personality and any breed characteristics that affect how the dog reacts to children. The right deaf dog in a home with children can teach the children a lot about dealing with someone who doesn't have the same abilities that they do.


This applies for hearing and deaf dogs. If you are considering getting a dog and you know children will be a part of the dog's life, then do the research and find the best match for your situation.

Myth: Because a deaf dog cannot hear an approaching car, a honking horn, or his owner's verbal command, he is more likely to be hit by a car than a hearing dog.


Any dog wandering off leash, in close proximity to cars, is at risk of being hit. Even the best-trained hearing dog may run into a car's path if he's focused on something he is after, such as a ball, or another animal. It is a cardinal rule of deaf dog owners to never allow the dog to roam freely, off leash.


There is still the chance of the occasional accident.  For example, if you drop the leash on a walk or your dog squeezes through an open door. However, not all dogs bolt the minute they get a chance. Both deaf and hearing dogs can be trained to sit and wait before being release to walk through a door.


Myth: A deaf dog is an accident waiting to happen, because even if your deaf dog is not showing any signs of aggressive behavior now, he will suddenly become aggressive when he reaches 3 years of age.


It is crazy to believe that your loving family pet will suddenly become aggressive on their third birthday. The only explanation for this myth is the fact that all dogs go through an "adolescent period" which can start as early as five months in small breeds, and last as long as three years in large breeds. However, a quick look at canine development also suggests that this theory is inaccurate. Canine adolescence comes with such behaviors as refusing to do commands they learned previously, accidents in the house, excessive chewing, and so on. Most dogs are through the worst of their adolescence by two years of age, but some dogs will remain in this phase for an additional year. A dog that is three years of age or older, has generally outgrown most of the annoying habits of the adolescent.


Myth: The deaf dog is incredibly challenging to raise and train because they cannot respond to verbal commands. They can be trained to respond to hand signals, but because the dog can only see the signals if it is looking at you, deaf dogs must be kept under strict control at all times.


It is wrong to assume that if a deaf dog isn't looking at his owner, he's inaccessible and out of control. Like humans, many dogs pick up movement and signals with their peripheral vision. A well trained deaf dog makes eye contact with their owners on a regular basis, keeping track of them, and repeatedly checking in, so the deaf dog matures and his training progresses, getting his attention becomes less and less of an issue.


Dogs are tuned into body language more than you think. When training any dog, visual signals are more effective than voice commands. A voice command is a nice additional aid for training, not a mandatory requirement because people talk, dogs don't. We place importance on our tone of voice and the words we use when speaking to our dogs. We seldom realize the additional messages communicated by our bodies, and the way those messages are interpreted by our dogs. For example, when you tell your dog to sit, do you also do a hand gesture?


Dogs rarely rely on the spoken word. They use their bodies to communicate intent, dominance, submission, and a wide variety of other emotions. Our dogs are always "reading" us, and they place a higher value on our body language than the words we speak.


Dogs are not born with an inherent understanding of the words we speak to them on a daily basis. Over time, a hearing dog learns to associate certain words with events and, eventually, these words become meaningful to the dog. A deaf dog is just as capable of making these associations, even if he will be learning these based on visual cues rather than verbal cues.


The trainer of a deaf dog will have to learn techniques designed for a visual leaning dog. This is not a difficult task, but if the trainer cannot make this adjustment, they will fail. This is not the fault of the deaf dog.


Myth: A few special owners have deaf dogs that are functioning well, but they are an exception. For every sketchy success story, there is another one of disaster and heartache.


Many different people find themselves with deaf dogs. Some of them get the dog and find out after the fact that their dog is deaf. Some people adopt deaf dogs, even if they haven't had one before. Others will deliberately look for a deaf dog, either because they have had one before, or because they want to give the dog a good home. If the only home that a deaf dog could be placed in was an "experienced" one, none of them would ever get homes. Experience isn't needed, everyone has to have their "first". The commitment to the dog is what is most important.
Posted by PPB&B at 6:55 AM No comments:

Whether your pet likes to romp and play or simply relax and be pampered you can rest assured your dog or cat will enjoy a vacation with us. Our trained, dedicated staff looks forward to pampering your pet with plenty of one-on-one attention.